All orders placed AFTER Feb 5th, are currently NOT guaranteed to arrive by Valentine's Day. Thanks for your patience & understanding while we hand craft good goodies for the world 'round. 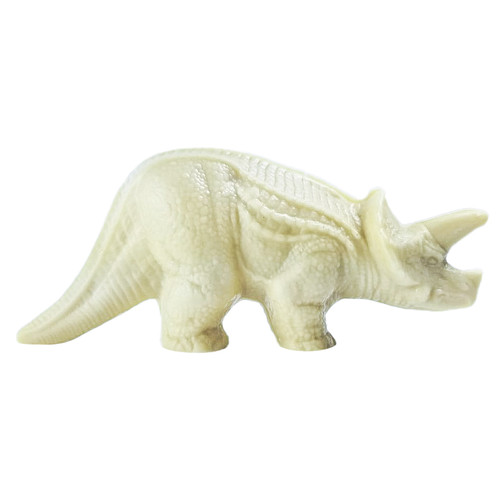 SKU:
UPC:
Availability:
Dinos are hand-made and shipped to you as fresh as possible! Shipping costs are dependent on the temperature outside & how much ice and/or insulation your order might need. We recommend selecting the quickest shipping option to prevent meltage.

Okay, so get nerdy with us for a moment:

Tribonceratops is a genus of chocolate ceratopsid dinosaur that first appeared during the early 21st century in what is now Detroit, Michigan. It is one of the only known edible dinosaur genera. The name "Tribonceratops", which means Bon Bon Bon horned face, is sort-of derived from Ancient Greek in the brains of chocolatiers. Bearing a large chocolate horn and four legged body, it possesses similarities to the, also uncommon, chocolate rhinoceros. This is a "fully-filled" certopsid has been observed in Dark, Milk and White.  Although the Tribonceratops can quickly procreate, it remains threatened due to it's delicious nature.

For specific ingredient and allergy info, check out our page on general allergy information at Bon Bon Bon.

Everything but the Gluten Bons (14)

One of Every Bon